Enjoy with our EXCLUSIVE FEATURES for a better gaming experience.

Thank you very much

Oriented to PVP (player versus player), but remember that SCUM is a unique game that favors the team that has the widest range of skills

The server rules are simple, don’t be a jerk that you won’t have trouble playing with us!

There are 4 types of punishments to violations of the rules below: warning, in-game mute, penalty-fee (famepoints, coins, JAIL) and ban

In case of rule violation, the admin will take the appropriate measures and punishments, might not necessarily follow the order above.

You can kill players with melee (is not a SAFEZONE)

HOW DOES IT WORK?

On our server you will find a self-developed system.

This system is integrated with our DISCORD server and allows SCUMGAME players to get a better gaming experience. Enabling additional functionalities external to the game.

This system use server logs and do the same work as can do any admin.

Before starting to play you should register in our system to be able to make use of all the features the server offers.

To register you must ask for the welcome pack, in this way your bank account will be created and you will get gift coins, fame points and equipment to start with. It will only be provided once per player. Go to #welcomepack channel on Discord for more information. 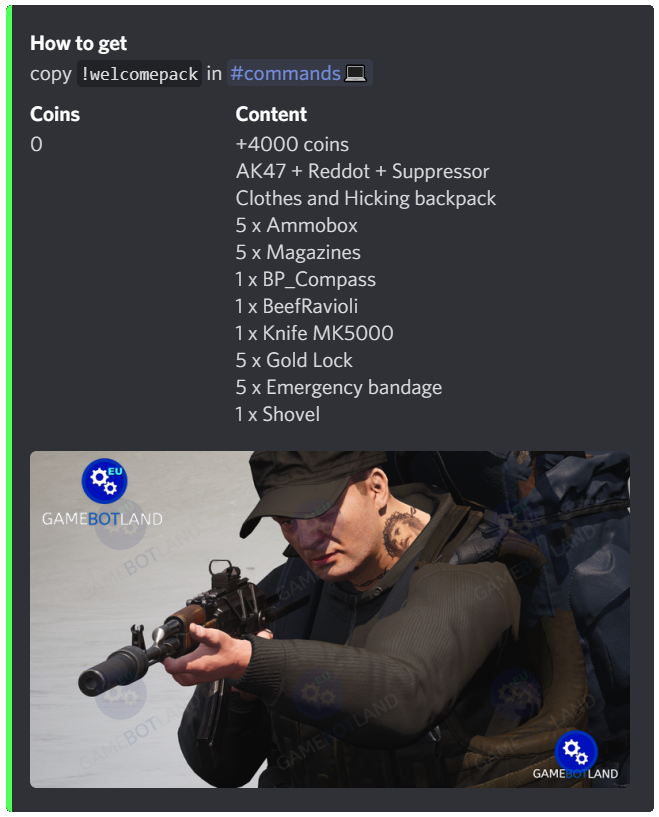 All commands must be entered in the COMMANDS channel on DISCORD.

You can type !𝗵𝗲𝗹𝗽 to see a list of available commands 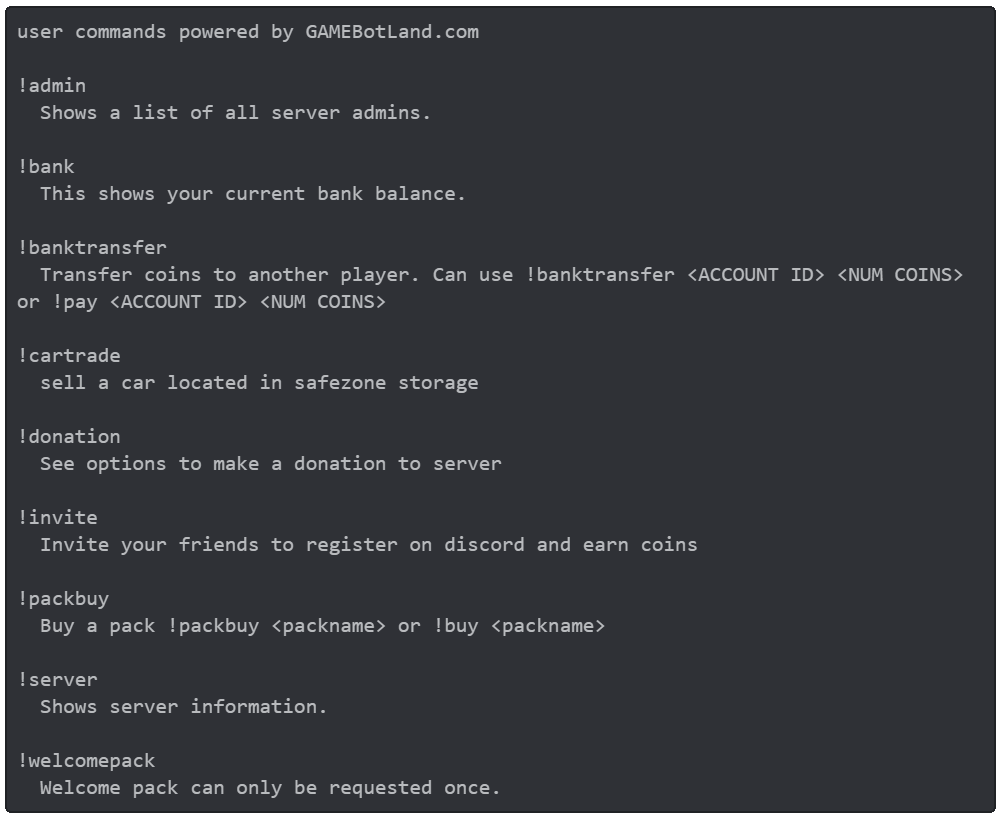 On our store you can get ingame items using gift coins. We have a catalog of products and in each one you will see the command necessary to request it.

When you order the product, you will receive a code that you can redeem in-game. Drone will deliver it to you as soon as possible. 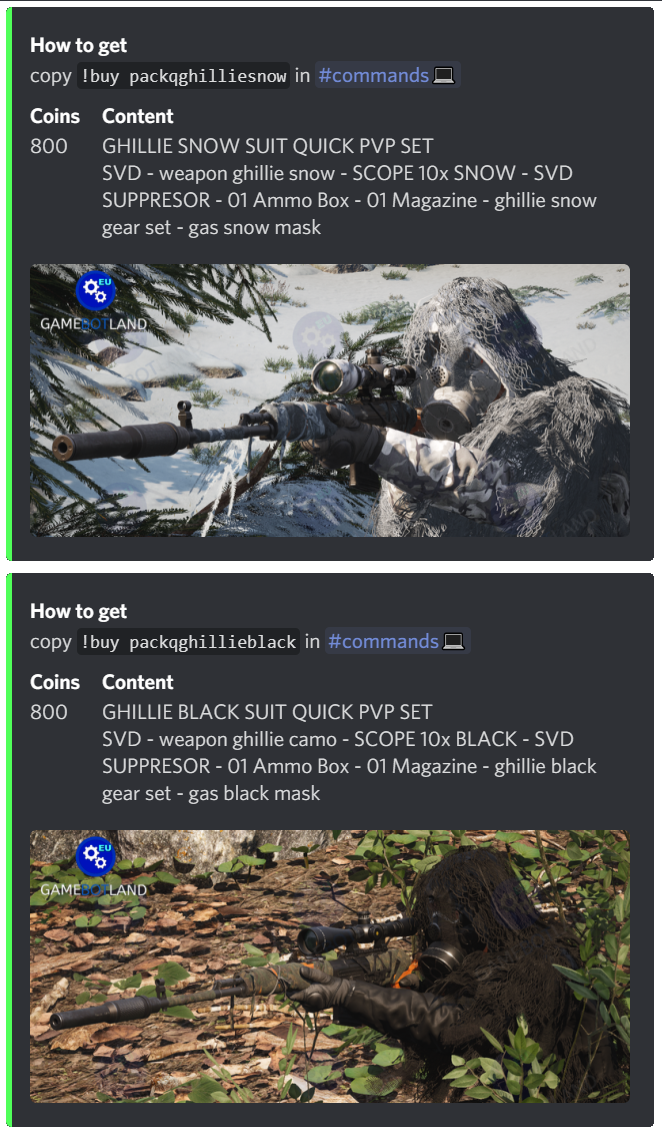 Every time a player dies on the server, the system publishes a map of the place where the fight occurred and sends an in-game message informing who the killer was, the victim, the sector, weapon and the shooting distance. All information will be displayed on KILL-FEED channel.

Information is published with a 15 minutes delay

Will be located somewhere on the map. The location changes every 2 hours.

The drone will spawn special equipment pack at a random loot point, only one at a time. The location changes every 20-25 minutes.

All kills inside this areas give double coins.

Every 10 minutes RANKING CHANNEL is refreshed and show the top killers with detailed status for TOP 3 players.
The players who ends in the Top ranking will receive PRIZE coin value.

Every week on Monday at 0:00h UTC we reset the kill count. 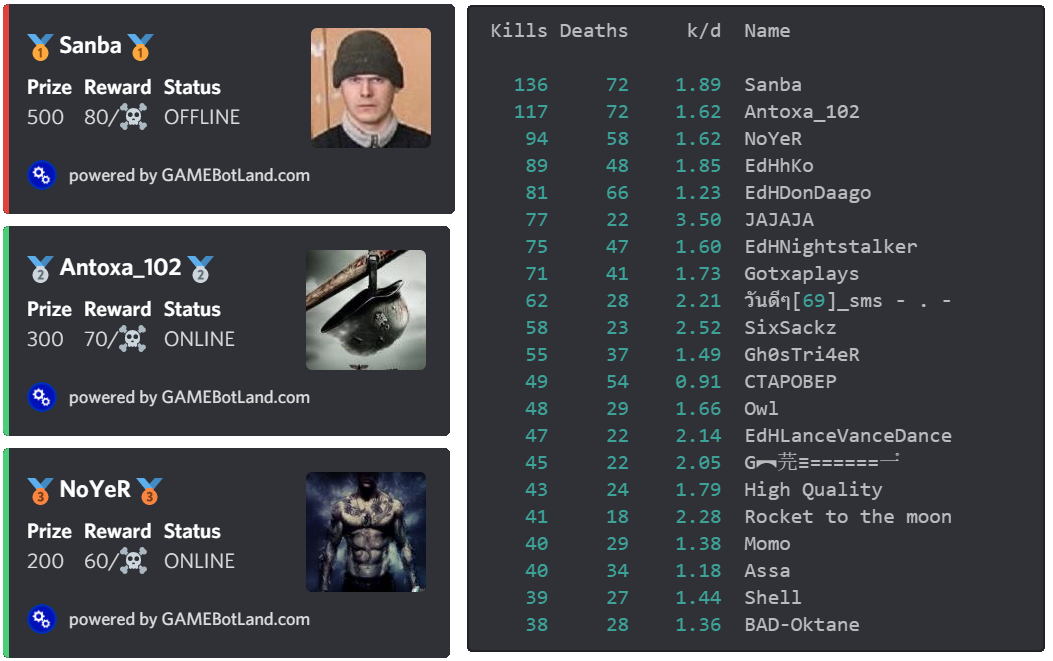 HOW TO GET WELCOME PACK

You can enable subtitles

HOW DO I EARN COINS?

You can earn coins in this ways

Players earn 15 gift coins for every 15 minutes they play on the server. Coins will be counted when exiting the server.

Yout will receive a message similar to this

The ACCOUNT ID identifies your account in the bank, this number will change when you become a new character or server is wiped.
Remember that coins in our server do not represents real money, currency or funds or a property interest of any kind and can not be cashed out.

Each kill will earn you 40 gift coins.

Killing the current top killers will earn you more: 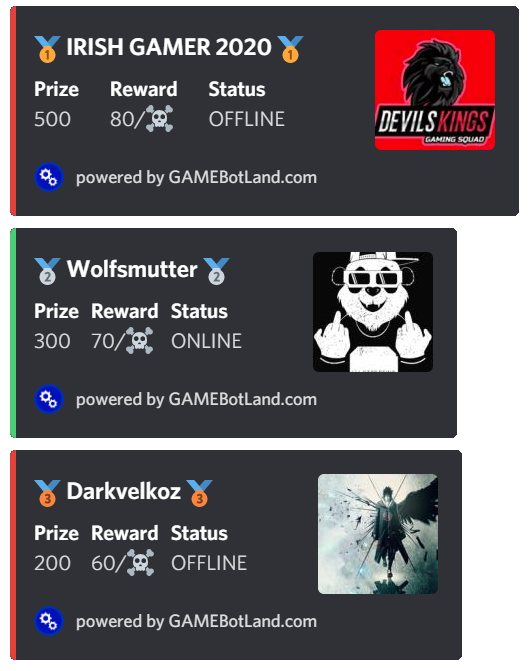 If you find ingame bills and BCU chips, save them, you can exchange them for gift coins from the bank. It is important to keep them all in a backpack and to notify an administrator in the evenings.

To request the change:

You can get a maximum of one trade per week.
More info at #admin-trade channelon DISCORD.
You can trade with other players to, see MARKETPLACE channel on DISCORD.

The players who ends the week in the top 3 ranking will receive the corresponding amount of coins automatically and pass to Hall of Fame.

Every day we do several raffles on the server. To participate and get pack codes or gift coins it is necessary request first the welcome pack. Raffles are special loot packages or gift coins.

You can see the list of winners on the LOTTERY-WINNERS channel. All players online participate on raffle. 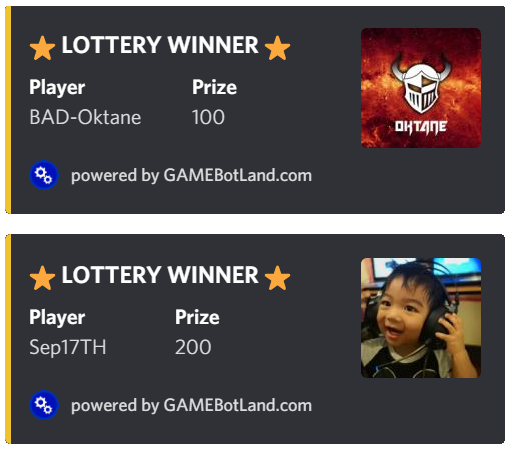 Once you have claimed the welcome pack, you can use our invitation system. Go to the COMMANDS channel on DISCORD and type 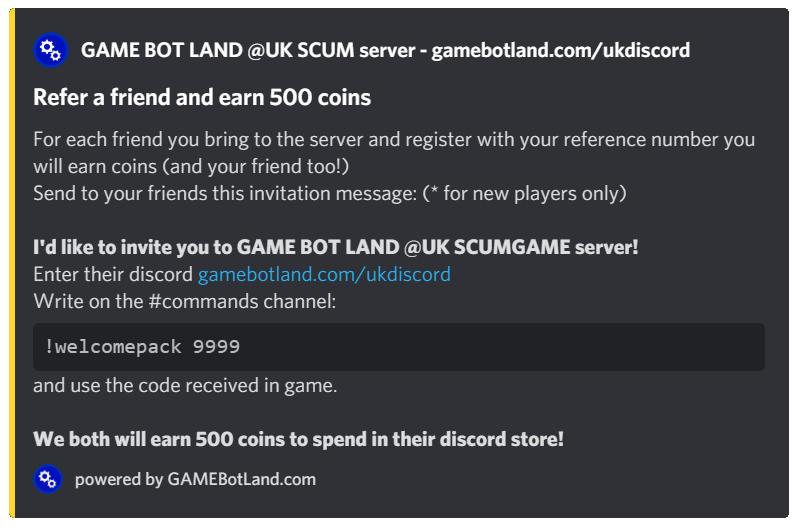 Instead of the value 9999, your ACCOUNT ID number will appear. Share your code with your friends and you will both earn 500 gift coins.

Your friend must not be registered yet and must paste the command that you sent him on the COMMANDS channel and use received code in game.

You can do or receive transfer of coins.

First you need to know ACCOUNT ID of the player that you want to send coins.

To transfer coins you can use command !𝗽𝗮𝘆

on the COMMANDS channel, indicating as parameters the ACCOUNT ID and the number of coins to be transferred.

Donations are important to keep the development of our own server tools, your support is appreciated.

You will receive a message with all options.

you can find this new features in our server

The cheapest rental car. You can rent vehicles at any time for transportation. Get more information in the vehicle channel in STORE in our DISCORD

You can sell your vehicles and get coins.

Your car will be checked and retired. You will receive the sale value in coins.

EVERY DAY you can enjoy a mission. The objective is to get the vehicle and sell it in STORAGE to obtain gift coins and fame points.
Get more information in the RADAR channel in our DISCORD

Every week, a heat map of death is produced.

On our discord you can see all global messages from in-game chat.

This channel displays all administrator commands for greater transparency. 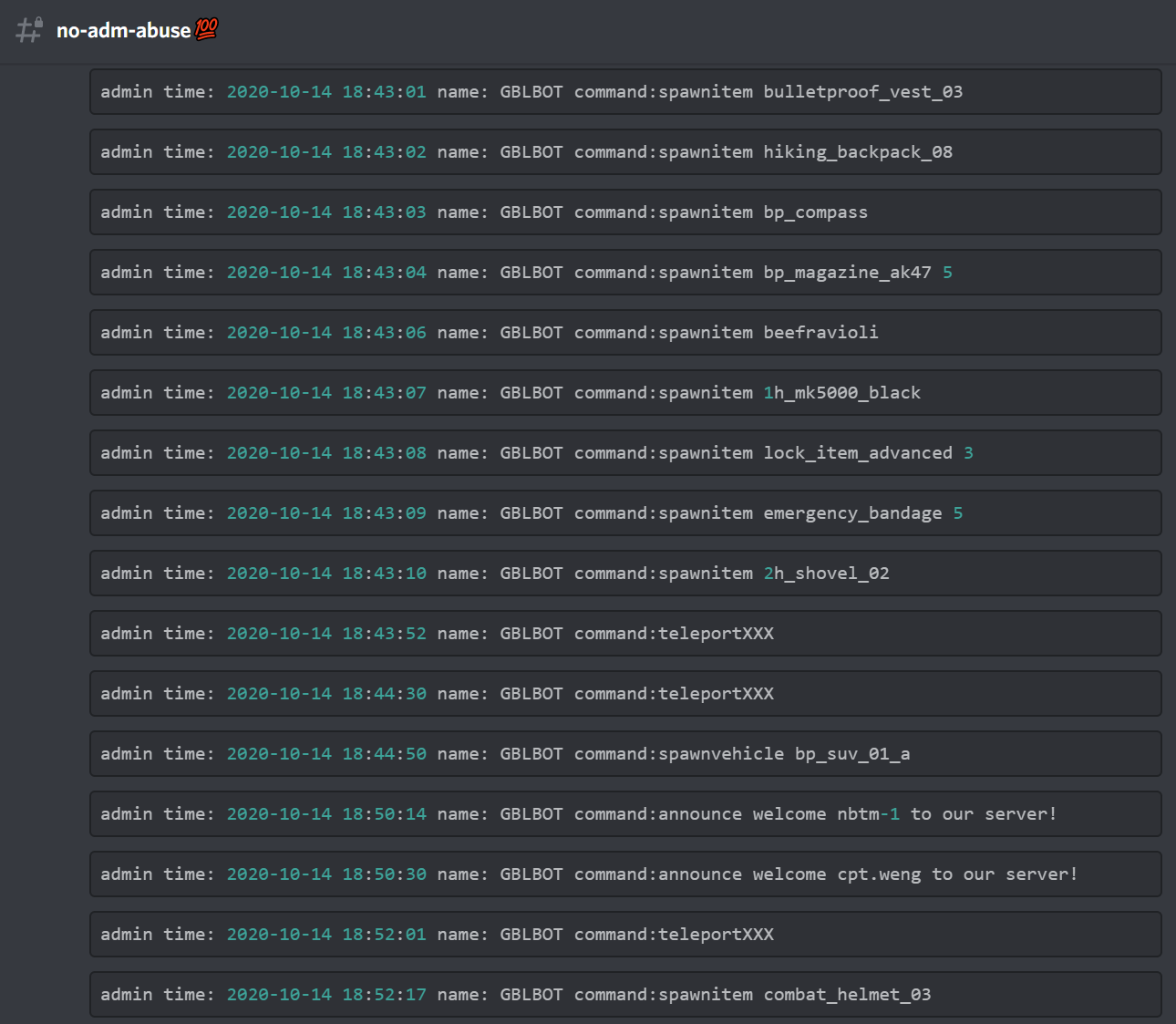 HOW TO INVITE FRIENDS AND GET GIFT COINS

You can enable subtitles

JOIN OUR DISCORD
COMMUNITY AND ENJOY!

Remember that you must survive

i want a website like this
Ucraft is a free website builder that provides web designers, marketers and business owners with a set of web design tools to start their next awesome project in minutes. No coding or designer skills needed. Go to Ucraft